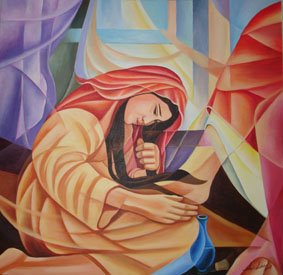 The Readings for this Sunday revolve around a constellation of fundamental issues in our relationship with God: sin, repentance, forgiveness, faith, and love.  Two of the passages used in this liturgy have been battlegrounds in the theological polemic between Protestants and Catholics, but ought not to be so.

Brothers and sisters:
We who know that a person is not justified by works of the law
but through faith in Jesus Christ,
even we have believed in Christ Jesus
that we may be justified by faith in Christ
and not by works of the law,
because by works of the law no one will be justified.
For through the law I died to the law,
that I might live for God.
I have been crucified with Christ;
yet I live, no longer I, but Christ lives in me;
insofar as I now live in the flesh,
I live by faith in the Son of God
who has loved me and given himself up for me.
I do not nullify the grace of God;
for if justification comes through the law,
then Christ died for nothing.

One of the key questions concerning this passage is the meaning of the phrase “works of the law.”  Does this mean “any human effort to be righteous,” as Luther and other reformers supposed?  Or does it mean “the regulations of the Old Covenant,” as Thomas Aquinas suggested?  Further light was thrown on this passage by the discovery of the Dead Sea Scrolls in the late 1940s.  Among the Scrolls was found a document scholars have called “4QMMT.”  This document is (apparently) a letter from the Essenes of Qumran (an all-male religious community on the shores of the northwest end of the Dead Sea) to the Pharisees of Jerusalem, written some time between 100 BC and AD 100.  It contains some of the few, perhaps the only, examples of the phrase “works of the law” in ancient literature outside of the Pauline epistles.  In 4QMMT, “works of the law” functions as a reference to observances of cultic purity, such as the ritual cleanliness of liquids, leather, wheat, the city of Jerusalem, etc.  The evidence of 4QMMT suggests that Thomas Aquinas was correct: “works of the law” was a semi-technical phrase employed by St. Paul and other Jewish religious thinkers of his day to refer to cultic observances of the Mosaic law.
What does it mean to be “justified”?  In classic Protestantism, “justification” is often seen as a legal or juridical category, like being declared innocent in a court of law.  However, the Catholic Church understands justification as an ontological category, as an act that changes our nature.  Thus, to be “justified by faith in Jesus Christ” means not merely that we are “declared legally innocent because we have faith in Jesus,” but that “we are truly changed in our being as a result of our faith in Jesus” (many contemporary Protestants would agree).  The cultic observances of the Old Covenant did not change anyone in their inner person, but faith in Jesus Christ truly results in us being “crucified with Christ,” so that “I no longer live, but Christ lives in me.”  This is a reality, indeed an experiential reality.  All Christians can and should know Christ personally and experientially.  Spiritual dryness and darkness may subsequently come as God purifies the soul, but the new life in Christ is never limited to an intellectual knowledge alone.  The saints experienced Jesus, knew him personally.
4.  The Gospel is Lk 7:36–8:3:

A Pharisee invited Jesus to dine with him,
and he entered the Pharisee’s house and reclined at table.
Now there was a sinful woman in the city
who learned that he was at table in the house of the Pharisee.
Bringing an alabaster flask of ointment,
she stood behind him at his feet weeping
and began to bathe his feet with her tears.
Then she wiped them with her hair,
kissed them, and anointed them with the ointment.
When the Pharisee who had invited him saw this he said to himself,
“If this man were a prophet,
he would know who and what sort of woman this is who is touching him,
that she is a sinner.”
Jesus said to him in reply,
“Simon, I have something to say to you.”
“Tell me, teacher, ” he said.
“Two people were in debt to a certain creditor;
one owed five hundred days’ wages and the other owed fifty.
Since they were unable to repay the debt, he forgave it for both.
Which of them will love him more?”
Simon said in reply,
“The one, I suppose, whose larger debt was forgiven.”
He said to him, “You have judged rightly.”
Then he turned to the woman and said to Simon,
“Do you see this woman?
When I entered your house, you did not give me water for my feet,
but she has bathed them with her tears
and wiped them with her hair.
You did not give me a kiss,
but she has not ceased kissing my feet since the time I entered.
You did not anoint my head with oil,
but she anointed my feet with ointment.
So I tell you, her many sins have been forgiven
because she has shown great love.
But the one to whom little is forgiven, loves little.”
He said to her, “Your sins are forgiven.”
The others at table said to themselves,
“Who is this who even forgives sins?”
But he said to the woman,
“Your faith has saved you; go in peace.”
Afterward he journeyed from one town and village to another,
preaching and proclaiming the good news of the kingdom of God.
Accompanying him were the Twelve
and some women who had been cured of evil spirits and infirmities,
Mary, called Magdalene, from whom seven demons had gone out,
Joanna, the wife of Herod’s steward Chuza,
Susanna, and many others who provided for them
out of their resources.

At first glance, this narrative sounds like a variation of the anointing at Bethany (John 12:1-8), but careful comparison of the accounts makes it difficult (though perhaps not impossible) to hold them to be the same event.  But could Jesus really have been anointed by women at a supper twice in his ministry?  Yes, and I think there is a plausible explanation why.  The event recorded here occurred earlier in Jesus ministry, and Jesus praised the sinful woman for her deed.  Not to be outdone by this unknown woman, Mary of Bethany, who harbored a great deal of devotion to the person of Jesus, later also anoints the Lord to shown the depth of her own love (Matt 26:6-13; Mark 14:3-9; John 12:1-8).
This Gospel passage deals with themes of sin, repentance, forgiveness, love, and faith that have shown up in the previous readings.  Like David in the First Reading, this woman is (almost certainly) a sexual sinner, who expresses repentance and sorrow for her sin.  She also exercises faith in Jesus Christ, the faith discussed by Paul in our Second Reading.
The direct way in which Jesus announces the forgiveness of sin: “Your sins are forgiven,” is all but a claim to divinity.  Although forgiveness of sin was usually obtained through the priests, and on occasion could be announced by a prophet (see the First Reading), it was mediated in the name of the LORD.  Jesus’ declaration appears to be unmediated: a sovereign judgment on his own authority.  The bystanders rightly sense that this is a statement inappropriate for any mere man.
In this account of the sinful woman, we observe the dynamic relationship between love and faith in the Christian life.  First, Jesus observes that the love shown by the woman is a sign that she has experienced the forgiveness of sins.  It seems likely that Jesus had some previous dealings with this woman, prior to this dinner, through which she had experienced this spiritual healing and forgiveness.
She doesn’t earn forgiveness by her love, but the love she shows is the sign of her reception of forgiveness.  That is the logic of Jesus’ parable told to Simon the Pharisee.  This kind of love should characterize our relationship to Jesus as well.
But note, this love for Jesus presumes the recognition that we are sinners and that we do need forgiveness from God.  This woman was probably Jewish in background and was conscious of the law of God and his will concerning the use of the body and sexual relations.  On the other hand, ancient Gentiles, much like modern Americans, had little or no sense that the promiscuous sexual use of the body could be offensive to God.  It was just a matter of pleasure, not a matter of following the will of the Creator.  The Good News preached by the Church offers forgiveness of sin; but both in ancient and modern times, there are many who find the offer uninteresting, because they are not conscious of having done anything that requires forgiveness.  We have to give thanks to God even for the fact that we have enough light to realize we are sinners in need of forgiveness.
Jesus tells the woman, “Your faith has saved you.”  Here we see the foundation in Jesus’ own preaching for Paul’s emphasis on the life of faith in Galatians.  This woman experiences forgiveness from the Lord himself, apart from the “works of the law,” that is, apart from following the prescribed rituals of the Mosaic law, such as animal sacrifice.  This faith is not a mere intellectual assent, but it is a heartfelt trust that naturally manifests itself in love.  As St. Paul describes it elsewhere: “For in Christ Jesus neither circumcision nor uncircumcision is of any avail, but faith working through love” (Gal 5:6).
This Gospel has obvious echoes with our own experience in the Sacrament of Confession.  In the confessional, we encounter Jesus again, as truly as this woman encountered him at the supper.  We express our love for Jesus, and sorrow for our sins.  The priest, acting in the person of Christ, lends his voice to Jesus in order to say to us, “I absolve you of your sins. . . .”  It’s a scandalous statement, only ultimately appropriate for the lips of God Himself; yet we believe Christ to be God, and the Church is his Body, speaking his words and performing his deeds in the world, even to this day.
Originally Posted: The Sacred Page.
Tags: Biblical Theology, Catholic, Christian spirituality, Christianity, church, faith, God, Holy Spirit, Jesus Christ, John Bergsma, Liturgy, Mass, Ordinary Time, Scripture, Sunday Reading Reflection, the sacred page, theology


Got something to say? Go for it!

Church and culture. Politics and philosophy. Morality and the marketplace. At FaithandReason.com, you can explore it all, deepening your knowledge of the Catholic faith and your understanding of the world in which we live. With numerous videos from the world’s top Catholic scholars, thinkers, and leaders, plus articles, blog posts, and more, FaithandReason.com is your online portal to a journey of discovery and inspiration.