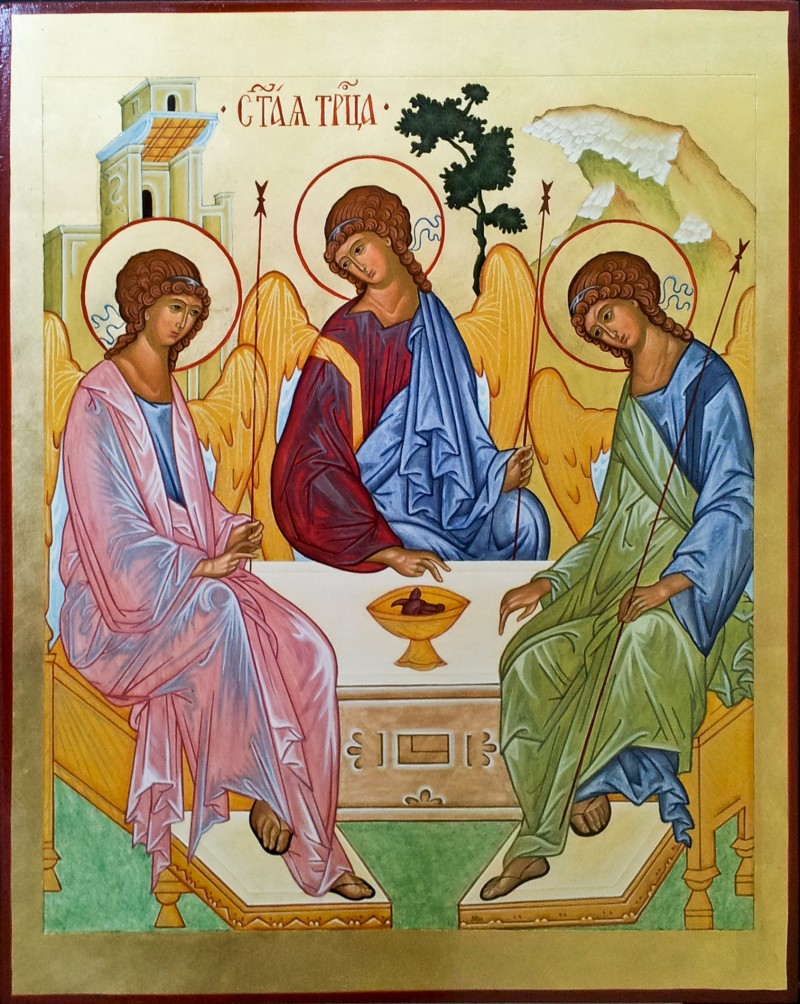 This Sunday, as we continue to accompany Jesus on his fateful journey to Jerusalem in the Gospel of Luke, we are confronted with a pair of Readings in which human beings host a meal for God: Abraham for the LORD in the First Reading; Martha and Mary for Jesus in the Gospel.  But is it really possible for us to “do God a favor” by giving him a nice meal?  We are going to discover that, while God graciously accepts our services, it’s really about what God does for us, not what we can do for him.
1.  The First Reading is Gn 18:1-10a:
The LORD appeared to Abraham by the terebinth of Mamre,
as he sat in the entrance of his tent,
while the day was growing hot.
Looking up, Abraham saw three men standing nearby.
When he saw them, he ran from the entrance of the tent to greet them;
and bowing to the ground, he said:
“Sir, if I may ask you this favor,
please do not go on past your servant.
Let some water be brought, that you may bathe your feet,
and then rest yourselves under the tree.
Now that you have come this close to your servant,
let me bring you a little food, that you may refresh yourselves;
and afterward you may go on your way.”
The men replied, “Very well, do as you have said.”

Abraham hastened into the tent and told Sarah,
“Quick, three measures of fine flour! Knead it and make rolls.”
He ran to the herd, picked out a tender, choice steer,
and gave it to a servant, who quickly prepared it.
Then Abraham got some curds and milk,
as well as the steer that had been prepared,
and set these before the three men;
and he waited on them under the tree while they ate.

They asked Abraham, “Where is your wife Sarah?”
He replied, “There in the tent.”
One of them said, “I will surely return to you about this time next year,
and Sarah will then have a son.”


Got something to say? Go for it!

Church and culture. Politics and philosophy. Morality and the marketplace. At FaithandReason.com, you can explore it all, deepening your knowledge of the Catholic faith and your understanding of the world in which we live. With numerous videos from the world’s top Catholic scholars, thinkers, and leaders, plus articles, blog posts, and more, FaithandReason.com is your online portal to a journey of discovery and inspiration.